I’ve had the privilege to get one of the most interesting projects of my life, collection of dolls based on science fiction stories by Dyan Bender. The story is of a desert planet, a distant trading post between civilizations, a melting post of cultures and genes. The crew consists of creatures evolved from humans, an odd group of misfit heroes from varying backgrounds. I love going beyond mere pretty and creating dolls that are wild, have personality, tell a story. That is why this collection is such a dream come true. Dyan’s stories weave a rich tapestry of an alien world in turmoil, echoing with old Earth cultures and branching out into new paths of evolution.

For inspiration, Dyan sent me series of scattered stories that describe the characters, their personality, other’s impressions of them, and their capabilities. I find that for me this opens a deep well of inspiration to draw from. Character design has always been one of my favourite things, from childhood drawings of Tolkien heroes, teenage role play characters, theater costuming and finally dolls. Every time I paint a doll I tell a story that brings it to life. It’s part of process.

For inspiration and creativity, there is nothing more limiting than someone coming up with a premade sketch – or asking me to make one and stick to it. Conscious design process renders mediocre and boring results at best, and regurgitates used up ideas most times. I do sketch, but always filling a page with myriad ideas for the same concept.  When designing a garment, I select materials, create a colour palette, then tune out my brain with an audiobook and let my hands do their part. Often I start with a square piece of cloth that I fit, drape, rouch and hand stitch directly on the doll. It is sculpting fabric rather than sewing.

However, I’ve always admired impeccable tailoring. Alexander McQueen was my idol in this and inspired by the exquisite costuming in the show Game of Thrones I wanted to give this collection a highly tailored and stiffly structured look. Especially since the first character was wearing leather armour. Hence, I need to break my comfort zone, sketch, create patterns and challenge myself.

I do love a challenge.

The first character in the collection is Rahal, a member of a race that calls themselves the Wanderers, the other species typically call them Natives. They are genetically closely linked to a big feline species called the Helkin. They have a tribal culture and few of them venture from the high desert regions, and when they are in high demand by the caravans. They are one of the few races that can sense the extra dimensional doorways commonly called Shadows. This makes her very effective guarding travelers from hunting predictors.

She has sharp little fangs, partially retractile claws on both hands and feet and faint spotting pattern along her flanks. Her eyes are dark with reflective retina like cats and surrounded by pigmentation spots. She bleached her long hair white, but has now let it grow to reveal her natural raven roots (hard cap wig custom made for her with angora wool). She wears an armour of Sand Dragon skin (vintage snake skin) lined with dark brown silk, and carries a serrated blade made out of the fang of the same beast (hand carved from two-component-epoxy putty).

The doll is a Busty Inamorata Nubia in Coffee skintone.

The second character in the collection is Fyre, whose secret name is Ardala. She is the adopted daughter of a wealthy Healer and direct descendant of the last ruler of what is often called the Great City.

She is a Highborn, a race the developed from Human close intermarriage of the ruling families. Thru centuries of narrowed bloodlines a race of physically beautiful and mentally gifted people consolidated power. Marked physically by extremely pale pearlescent skin and blazing red hair with oddly metallic quality. Highborn are marked by a drive to acquire power and are gifted with something other races call Charisma.

Ardala is young, she has gained her full height but is still not filled out completely. She has been able to pass as a boy for years. Her eyes are blue, the warm blue of shallow seas, and bright with curiosity and good humor. Although wealthy now for many years she and her mother moved often and she has learned to easily adapt to new locations…she enjoys learning about new people, customs and cultures. She is gentle, and her gentle nature shows in her expression. She completely lacks the imperious and commanding nature that typically marks Highborn, but she is just starting to understand that she has personal power, she is starting to learn that she can command the attention of others.

She wears her silk finery, wide pants of teal silk that were left a bit short in the ankles in her last growth spurt; silk slippers encrusted with brass sequins; a silk chiffon vest draping over her young shoulders with fine brass chains; a bra heavily embellished with tiger eye gems, brass and gold, forming hawk motives that symbolize and foreshadow her soaring potential. Her hips, neck and intricately braided hair are adorned with gold chains.

The doll is a Andro Inamorata Nnaji in Milk skintone.

The third character in the collection is Ashe. She is one of a species called Felashi, Shadowwalkers or Immortals since they have such long life spans. Much of what is called magic has come into the other species from interbreeding with Felashi. They are telepathic or empathic and have other talents as well. Their eyes turn full silver as they use these gifts.

During the centuries Ashe has roamed the world, she has lived many lives. She has been a captain of a space ship, protector of a royal family in a long gone capital, and a shadowwalker to guide the caravans through hostile deserts. Hard life has left her body and soul scarred. She blocks most of the memories, and people, out. Her companions are a pair of Helkin, Shadowcats, Polaris and Aurel.

Ashe’s hair (hard cap wig made with saran and mohair) is midnight black, but glimmers with red highlights when sun touches it. A strand of hair has turned grey from and old scar running up from her right eyebrow. Her wears no make up, so her face up was more about giving emphasis to the sculpted aging, blushing more shape to the face, scars and few beauty marks. Her body was also was heavily resculpted to add massive scarring. The sculpted micro wrinkles concentrate on her hands and face, areas that would be bare to to arid environment of the desert planet.

Ashe wears a, armour patched together over time. Other characters assume it is Sanddragon skin, but parts of it are of a creature now extinct. I wet-sculpted ostrich and salmon leather to create this mythological armour. Since they are in a hot climate I took a gladiator approach to the side and left the back bare, covered in straps that display her gruesome scar from a star ship crash. A wound that would had killed a human. Ashe is a warrior and wears her weapons as other women wear jewellery. She has a Sanddragon fang sword, similar to Rahal’s, only Ashe’s has a decorative carving running down it’s side. She also carries a pair of honour blades and an array of smaller knives hidden all over her person. I even hid two throwing daggers into her hair piece. She also carries a quarter staff with Sanddragon teeth embedded into it as a spiral, and ties her House colours onto this staff when approaching and Oasis deep in the desert.

The doll is a Andro bust Inamorata Valerie sculpt in Caramel skintone, resculpted to add aging and scars.

These new characters in the collection are two Helkin companions of Ashe: Polaris and Aurel. Helkin an alien feline species, large, fierce predators and highly intelligent. The other characters in the books wonder if they are in fact sentient beings as Ashe seems to communicate with them telepathically.

Almost all Helkin have spots and patterns, and Aurel ‘s silvery blue fur is inspired by a snow leopard. She is a young, bold and playful creature, often being silly like a kitten. Polaris is older, calm and energy efficient. His tawny colouration is inspired by a king cheetah.

The cats are 3D printed pets designed by Helga Reinhard.  They stand about 15cm high and pose beautifully. Each cat comes with two heads and 4 tails in different poses. I painted them with highly diluted acrylics and then assembled the kits using thin rubbed bands. 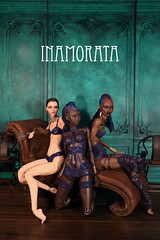 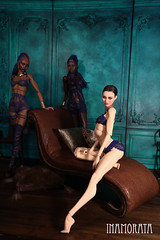 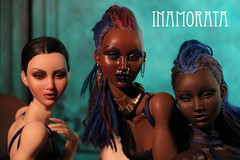 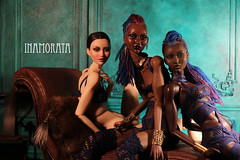 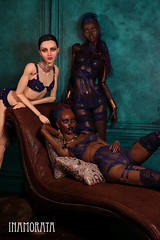 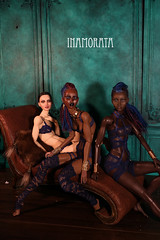